We are developing a new Record Merging feature that will be arriving in the coming months for all Specify 7 users! We are seeking feedback from the community for development!

With the introduction of Record Merging feature, Specify will make it easier to manage all records in a more efficient way.

For the initial release, we plan to only support the Agent table, but we are planning on next supporting Locality, and eventually all tables in the database.

Record Merging allows users to combine two or more records into one. This feature is especially useful when dealing with multiple records that represent the same person or locality.

For instance, when a user has uploaded a large amount of data that created duplicate agents of the same person, they can now merge the records into one and delete any duplicates, thus keeping their database clean and organized.

Additionally, this feature is also helpful when users have to combine records from different sources which may contain similar information.

Using Record Merging, users can quickly and easily combine records to form a single record. The merged record will contain all desired data from the original records, allowing users to keep the important information from each record, and offers the ability to modify and add information to the newly merged record.

The Record Merging feature can be accessed in the query builder within Specify. After selecting the records to be merged, users can select the Merge Records button and then they will be prompted with the “Merge Records” dialog.

A simple scenario– two agents that are intended to be one person are referenced by a variety of different records. Currently there is no easy way to point all these references to the correct agent, but with the new Merge Records interface it is as simple as selecting the duplicates and merging them in the following dialog: 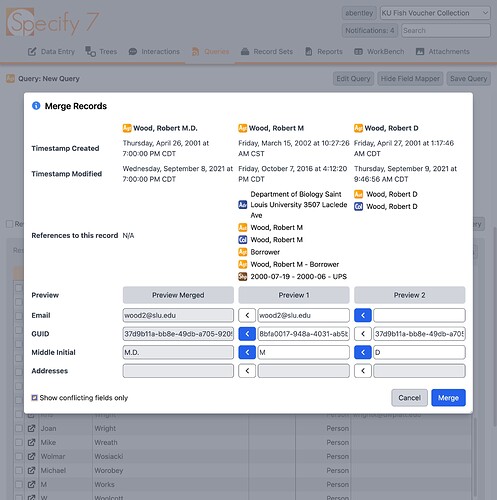 A more complicated example where many fields in the Agent table differ from each other: 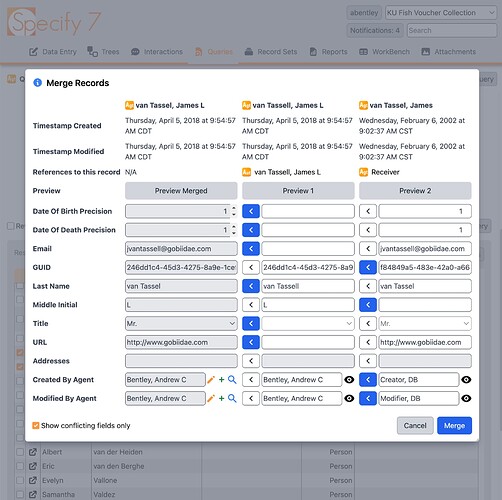 In the following video, you can see the basic functionality of the new merging interface:

Once you are satisfied, you can click Merge to commit the changes.

We would love to hear feedback from the Specify Collections Consortium about our agent merging tool. Please share your thoughts, questions, concerns, or requests with us as we continue to develop this incredible tool.

A number of thoughts here in no particular order:

That’s it for now but I am sure I will come across more when I start playing with it. Great job though. This will be immensely useful - especially when it is available for other tables.

oooooooooooooooooo, can’t wait to try it out! I have 3-4 known agent ‘merges’ just waiting to happen!

This will be such a useful feature - we have a lot of agents that we need to deduplicate following migration. It would be great to see it available for Collection Objects and Preparations in the future too.

Would access to this be managed through the user role/permission system?

How are the fields displayed for comparison/selection determined? There are certain fields that we would want to include to help ensure effective disambiguation of agents. e.g. birth/death dates, fields from agentIdentifier, group member etc.

Is there a way to determine which record to ‘keep’ and merge other data into?

I’d +1 the suggestion of some fuzzy logic to help identify the records to be merged.
Note, we actually already have a implementation of this developed as a custom app for the RBGE specify. - which does both record merging, and fuzzy matching (across all agent fields) to suggest candidate merges. Let us know if you’d be interested in talking through our experiences of this - I’m sure we could setup a call with the developer if useful?
Thanks

That would be great! It would be incredible to talk through the development process and implementation. Can we set up a call with the developer sometime next week?

Looking forward to hear the details in tomorrow’s webinar.

Are there any thoughts on developing a tool for massive merging? For agents, of course? One often finds one’s database loaded with agents that are obvious duplicates, by the thousands. Resolving agent replication or name variants one at a time is extremely welcomed when in doubt: having the entire record info to do match variants or replicates with confidence is most useful.

But it is the volume of replicates what swamps most collections