Any field in which data is limited to a controlled vocabulary is called a Pick List. Specify ships with many fields already formatted as pick lists and populated with choices. For example, the Agent Title field is pre-populated with the choices of Asst. Director, Curator, Dr., Mr., Mrs., and Ms.

Pick Lists are part of the form system and therefore shared within a collection.

Choose System > Collection Setup > Configuration then click on Pick List Editor in the side bar menu. The Configuration tool (and menu) is only available to users in a Manager group.

A second dialog will open for configuring the Pick List. The Pick List items are located at the bottom of the dialog.

Updated System Pick Lists can be shared with other collections or colleagues by exporting them from the originating colleciton and importing them into a different collection. This task is completed in the Configuration tool: System > System Setup > Configuration.

Next, choose a Pick List(s) to export from the dialog list. 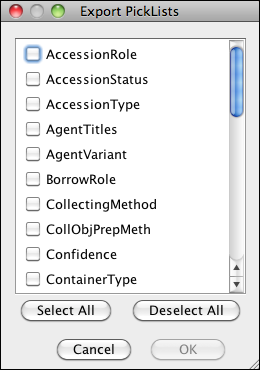 Next, a system dialog will appear to name the file and choose where it will be saved in your file system.

Next, choose the Pick List file from your system directory.

The Pick List(s) will be updated in the current collection.

Note: User Defined Pick Lists should not be imported using this method UNLESS the Data Entry forms for the collection have been updated to include the pick list(s). Importing a User Defined Picklist without first editing the forms will cause Specify to work improperly.