Symbiota is an open source software project dedicated to providing web tools that allow biologists to curate quality datasets of the world's flora and fauna.

Data in Specify can be sent to Symbiota through an automated tool once the following steps are complete.

Type or Copy/Paste the base URL for your Symbiota project (this must be provided by Symbiota) into the Base URL text box.

Next, add the Symbiota tool to the Task Bar:

Check the Add Symbiota checkbox. The Symbiota button should now appear in your Specify Task Bar.

Next, define the relationships between the fields in Specify and the predefined fields in Symbiota by creating what is referred to as a 'mapping'. This is accomplished using the Schema Mapping tool.

Note: Symbiota uses a subset of the Darwin Core schema. If a schema mapping based on the fields in Darwin Core already exists, you may choose to use that mapping rather than create a new one and proceed to step 4, Create a Symbiota Connector.

Schema refers to the many tables and fields that systematize the many dimensions and relationships of the data within biological collections. When preparing data in Specify to be published in Symbiota, it is necessary to use a predefined schema to ensure all necessary data fields are included in the data export. Specify includes a schema for use when publishing data to Symbiota.

Note: If you already have a Darwin Core mapping set up for publishing your data, you can reuse this existing mapping and skip this step. 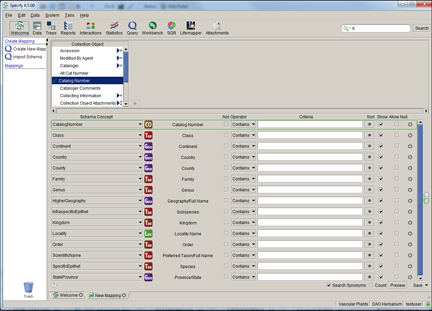 Remap a term by simply clicking the list box (

button. The Schema Concept will be defined as 'Not Mapped'. Choose a schema Concept from the drop down list to map the new field.

Note: it is not necessary to include attachment fields or a field for GUID in mappings, both of these are automatically included in mapping files.

Symbiota requires that all uploaded records be unique.  Due to the one-to-many relationships contained in Specify databases it may be necessary to add certain conditional fields to the schema to ensure this e.g. adding the Determination Current field and setting it to Yes will eliminate multiple determinations.  One can also select a table to take advantage of the formatted and aggregated value for that table e.g. selecting the Collectors table will add all collectors on a single line.  Fields can also be added to eliminate certain records from the resulting index.

Note: uncheck the Show checkbox to hide the schema concept in the exported data cache.

4. Before saving the schema map for Symbiota check the following list against your mapping. If any of the following items are not correct the data upload to Symbiota will fail.

The Data Exporter application is located in the bin directory within the Specify application directory, which stores the executable files for Specify. Double click Data Exporter (or select it from Start/Program Files/Specify on Windows) to launch the tool. Users are required to login using their Specify Username and Password.

The Data Exporter application opens as a three-column table with action buttons. 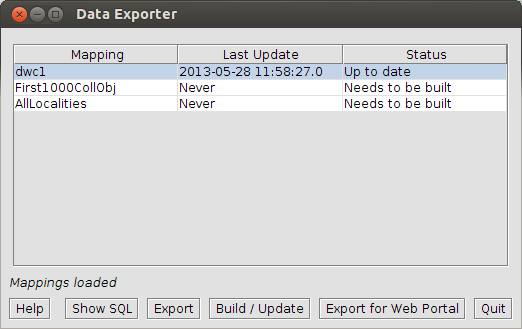 A Symbiota connector is the the 'pipeline' Specify uses to send data to Symbiota.

Saved mappings that include the required fields for Symbiota will appear in the dialog. Select a Symbiota Schema Mapping from the list and click the OK button.

Add information for the Symbiota Connector in the next dialog:

Once a connector has been created, it will appear in the Symbiota Connector section of the side bar. Click on a Connector in the side bar to view information about the Connector including the status of the associated data cache in the Workspace.

Click on a Connector in the side bar to view information about the connector, including the status of the associated data cache in the Workspace. 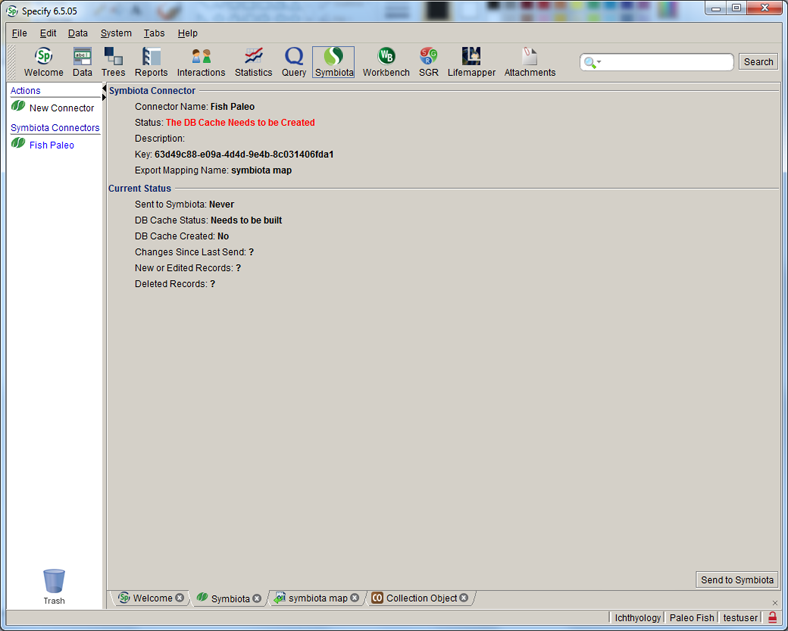 The Status field displays the status of the data cache.

Note: When new data is entered while the Symbiota tool is open in a tab you must click on the connector to refresh the status.

Right-button-Click on the Symbiota Connector name in the side bar to edit the associated Name, Key, Description or Remarks.

Drag a Connector and Drop it onto the trash can to delete it.

Note: Clicking the Send to Symbiota button when the Status Message is Up to Date will display a prompt with the option of sending the entire data cache to Symbiota.

Note: Caches with a large amount of data may take a few minutes to transfer.