The Storage tree is scoped at the Institution level, but as with the other trees only collection objects for the current collection will be shown when right-clicking on the node and choosing Associated Collection Objects from the context menu.

The various Trees show relationships in a hierarchical structure. The hierarchies are composed of levels or ranks represented by columns in the display. Data values (e.g. taxa) are referred to as "nodes", and nodes are related to one another in "parent-child" relationships. Nodes within the next rank lower in the hierarchy are referred to as "children" And every node, except the basal root node, has one "parent" node.

Ranks are shown in columns on the tree. tree column colors can be set in Preferences > Tree. See also Preferences.

You can navigate to the Tree interface by clicking the Trees button in the navigation bar.

Nodes on specific trees can only be deleted if the following trees are not used in the specified ways:

If deletions are required, the condition or conditions preventing the deletion must first be eliminated. For example, open the related Collection Object record and delete the determination before deleting the tree node.

Tip: If you are using Specify 7.8 or newer, you can select a node without expanding it by holding the Shift key and clicking on a node.

After selecting a node in a tree, you will see the following in the top right of the tree interface become interactable:

Move a node (and its child nodes) to a new parent. This is useful when a data entry error has occurred, or a new node has been introduced while uploading from the WorkBench. Nodes may be moved between ranks, but enforced ranks may not be skipped.

Synonymize the node (in the Geography and Taxon trees only). The node that is selected first a synonym of the second node selected. This new preferred node is called the accepting, or target node.

In this instance, I first selected Spatularia, then selected Proceros. After clicking Synonymize, I confirmed this node synonymization. Now, the node Spatularia is in red and references are now synonymized with Proceros. The target node is then the Preferred node. Changes in taxon are reelected in fields in the Determinations table. Collection object determinations are captured in the Taxon and Preferred Taxon fields. When a taxon is not a synonymy these fields will both refer to the same taxon (A). If taxon (A) becomes a synonymy of taxon (B) the Taxon field will still reflect Taxon (A) but the Preferred Taxon will change to Taxon (B).

Synonyms are differentiated from non-synonyms by their text color (by default, red). Synonyms also show as a tool tip on the node. Tool tips are displayed by holding the mouse over a rank.

To undo a synonymy, select the node, then click Undo Synonymy in the menu bar. 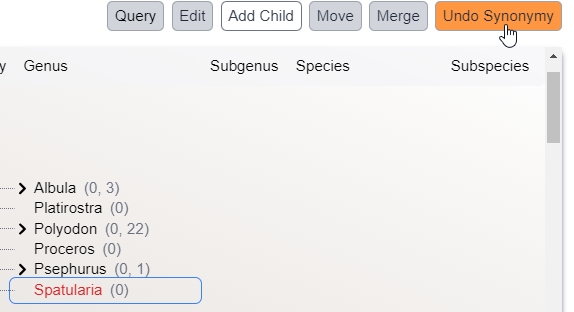 Note: When taxa are synonymized in the Taxon tree, the Preferred Taxon field on the determination form is updated.

Synonymized node item colors are set in the User Preferences.

Merge parts of the tree. This is typically performed to correct parts of the tree that are duplicated. For instance; if the country of the United States of America were entered as both "United States" and "U.S." and both included a large number of children (presumably U.S. states), a correction would require many distinct actions.

Specify’s Tree Merge function however allows users to combine all the child information and choose the accepted form of a parent. The children of the node being dragged (unwanted node) will merge with those included in the node being targeted (remaining node) and the unwanted node will disappear. For example, if in the example above the “United States” included the states of Ohio and Oregon and the “U.S.” included the states of California and Hawaii and the user dragged the “U.S.” node and dropped it onto the “United States” node the tree will then have only the United States as a country (parent) with the states (children) California, Hawaii, Ohio and Oregon. If both nodes originally contain Ohio with various children of that rank (in this case U.S. Counties) t will be combined into a single node and all Counties would be accumulated or merged if they were previously redundant.

Select Cancel on the dialog to place the node back in its original position.

Counts are displayed next to the Node as two numbers (X,Y):

The last node on the tree will only show the X value, as there are no nodes beneath it.

To find a node on the tree, you can use the Search Tree function in the top-left of the tree view.

By default, Specify places a wildcard at the end of a search term. Specify will also recognize an astrisk (*) as a wildcard when typing a search term when typed in front of, or in the middle of each search term. For instance, Joh*n could be used to search for Johnson County in the Geography tree.

Click the Next button to find the next usage of the term in the tree. For instance, if Johnson is the name of a county in different states, typing the term in the find text box and clicking the Find button will find the first instance of Johnson in the tree. Clicking the Find button a second time will find the next instance of 'Johnson' in the Geography tree.